Yup. Geez this first combat post after so long is gonna be like me pooping out a brick after plugging up my ass with hot glue....

I have much more catching up to do than you guys. (x Also, we have to figure out how I'm going to magically rejoin the party.

Huh. I see. Well, when I have time, I'll gloss over what I've missed so far and see what has transpired. 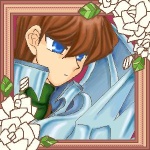 So I'm giving you the choice to kill him or knock him out and let him live. Then maybe you can try helping him get his memory back and interrogating him. But still it's up to you.
_________________

Hmm, looks like I'll have something to figure out during my root canal tomorrow.

Hey mario- post the results of combat already you asshole! You're killing us. Also split the Marketplace into a sub forum so I can make individual threads for the freeplay areas.

ok... some response would be nice. Also the marketplace for Cassius and Julius is now officially open. You can freeplay in the areas I've got built until I add more. Although there's no merchandise ATM, none of y'all have anything you can trade with at the moment.

Please read the following in a ridiculously retarded voice.....
SoMeOnE aNsWeR MaLtHus! We have no idea what's going on. We're just stalking Hei..... <(o_0<);;
*headdesk*

I answered the godsdamn question- post a freaking response!

Alice flicked her box cutter open and close lazily as she stared into the campfire in front of her. She had managed to ignite the pieces of the splintered table after fiddling with the settings on her Beam Rifle and, after some rummaging through her supplies, found and placed a kettle over the flame.

As the water began to simmer, Alice glanced down at the jar of Forger's coffee grounds on her lap. Where had she gotten this..? It seemed like she had it for years... In fact...
Alice turned her gaze to the box cutter in her hand and slid it open. She had this "weapon" for a while too.
Was she forgetting something? She felt like she had some long forgotten task to complete.
Alice narrowed her eyes at the blade. Was she on a mission..?
She glanced around her and, to her surprise, she found herself in the company of strange men.
Incredibly strange men. Especially the one petting a decaying jackal.
Where was she?