It's okay. My turns will be a little erratic because I may need to stop at some point and help someone at the front desk here anyway. Really, I just wanted to try out some of my concept decks that I don't actually have physically, but I found an emulator online that allows me to play with them without cheating lol
_________________

Joseph- Gisela apologizes for jizzing on your face and burning you to a crisp.

Matt- Although Gisela was taking a nap during our match after essentially having come out in both games against Joseph in the last match, the rest of my deck apologizes for being exactly what I needed to deal with the cards you played at the exact right moment.

So I went and made planeswalker designs based off of our Gazebo characters. I did my best to keep them in character without making them too overpowered. Feel free to change them around if you think you have an ability that would fit better; you guys probably know your characters better than I do haha.

Nick Wyght, Ultra Bad Ass
{GGGGGG}
+3: Nick Wyght, Ultra Bad Ass becomes a 5/5 green Human Beast creature until end of turn. Target creature fights against Nick Wyght, Ultra Bad Ass. Prevent all damage dealt to Nick Wyght.
-5: Nick Wyght deals 2 damage to each creature without flying target opponent controls. If a creature dealt damage this way would die this turn, exile it instead. Then remove it from exile and put it into the absolutely-removed-from-the-freaking-game-forever zone.
-15: Separate all permanents target player controls into two piles. That player sacrifices all permanents in the pile of his or her choice. Creatures you control get trample and +X/+0 until end of turn, where X is three times the number of lands sacrificed this way.
(6)

Drako Morte
{3B}
+1: Put a 1/1 black Zombie Hound creature token onto the battlefield.
-3: Return target creature from a graveyard onto the battlefield under your control. That creature is a black Zombie in addition to its other colors and types.
-8: Each opponent sacrifices a creature, then flip a coin. If heads, return all creatures sacrificed this way to the battlefield under your control. They are black Homunculi in addition to their other colors and types. If tails, deal damage equal to twice the power of all creatures sacrificed this way, divided evenly among any number of target creatures and/or players.
(4)

Athos, the Silent
{1WW}
+1: Creatures you control with power 3 or less are unblockable until end of turn.
-2: Target player cannot play spells that target you or permanents you control until the end of your next upkeep.
-6: You get an emblem that says "You may cast spells with converted mana cost 3 or less without paying its mana cost" and "Spells your opponents cast with converted mana cost 3 or higher cost {2} more to cast."
(3)
_________________
The 177 Damage Attack Incident of 1942...
NEVER FORGET. 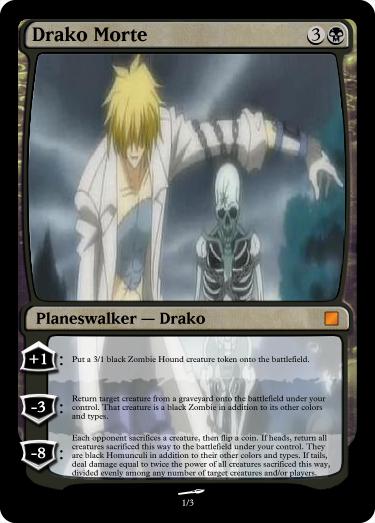 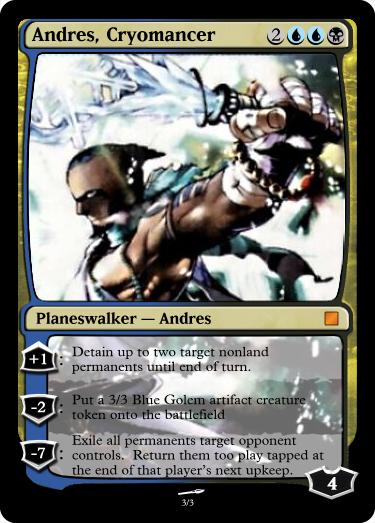 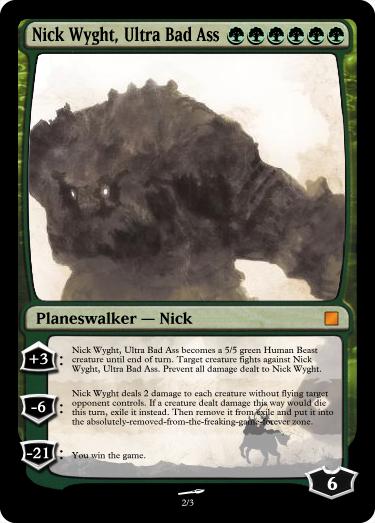 Alright guys, so tonight I made a last minute decision to take part in FNM for this week. It was a 2HG, and my partner for the evening was Parris. For those of you who don't know Parris, he's a student at PHS, like most of us were once before. A thespian, singer and performer at heart, and now a proud planeswalker of 2 months.

Anyway, he and I registered and got our packs. We sifted through our cards and looked for anything interesting. After weeding out the less useful limited cards, we had our decks built. Parris ran BW Exalted and ran Guardians of Akrasa, Angelic Benediction, Knights of Glory and Infamy and Tormented Soul. He had about two of each of those. That, and he managed to pull three Divine Verdicts, an O-Ring and Cathedral of War. It was ridiculous. I ran red green after pulling a Thragtusk, Yeva, Firewing Phoenix, 2 Goblin Arsonists and Krenko's Commands, a Searing Spear and 2 Wild Guesses among other things.

Now before I continue, let me just say that we were damn proud of our decks. We had fantastic win conditions, good defenses and responses to threats, and we just felt like we were gonne be invincible that night.

We went our first game so well. Our opponents kept attacking, only to be Plummeted, Speared, Murdered, Verdicted, or even blocked by a Deadly Recluse flashed in by Yeva. All of Parris' Exalted's triggered, so we'd be hitting for 4-6 life every turn if we weren't being blocked. He focused on the offense, and I managed defenses with all my little chumps. We honestly could have taken the win if Parris didn't get milled to death by Jace and Mind Sculpts.

Next game was slightly more miserable, only due to the fact that our opponents had Rancor and attached it to every damn creature that hit the field, many of which were fliers. What was even worse was that the other guy Sands of Delirium'd Parris constantly, and nearly all his got milled by the Sands. That, and neither my Spear nor my Recluses wanted to come out, so we lost that one too.

Now the last game was just sad. We could have won it easily. We started off strong, Parris had a good number of Exalted creatures out and he swung with a single unblockable Tormented Soul, and I pumped it with Bond Beetles. With all the cards we had out and the unbelievable mana screwed position the other guys were in, we were at 31 and they were at 16, until one guy put down Krenko. Fucking Krenko. I already used my spear for an annoying flyer, he never attacked with it so we couldn't Verdict, Parris couldn't draw another Swamp for some reason so he couldn't Murder it, and O-Ring just didn't wanna play anymore for that match. So basically he swung with about 50-ish goblin tokens. It wasn't a happy time.

But to be honest, despite the losses, I'm kinda really happy about this deck and my pulls tonight. Parris went home with Liliana and a Door to Nothingness, and I've got some pretty good cards that I'm happy about.

Also, my decklist for the night:

So yesterday, Justine made a last-minute decision to go to a dance, basically meaning that I had to wait for her for a good 5 hours for the dance to end. And, just like last week, I decided to go to FNM. This week was a regular booster draft for M13, and I think I did pretty well. I drafted UB, focusing around Mind Sculpt and Jace's Phantasm, both of which I drafted 2 of. The deck actually ran pretty well. I went my first match against a guy who ran a UW deck with Divine Verdicts and a bunch of flying creatures that pumped each other. I lost that one since neither of my Phantasms wanted to come out (and by the time one did it was too late), but my streak improved from there. My next match was against a guy who ran solely black, and I beat him down at 2-0. His main threat was a Vampire Nighthawk, but I always held onto my Murder for it, if not Archeomanced back into my hand. The last round for the night was a guy that ran RG, and he told me that he tied both his matches prior to ours. The first match was an easy win, turn 1 Phantasm, turn 2 Mind Sculpt, turn 3 Duress and Ravenous Rats and game from there. On the second match, he started off strong and ended up getting my life down to 12 before I could make any major moves, only using small chumps like Ravenous Rats to block. Around turn 5 or 6 I cast Sleep for a stall, Archaeomanced Sleep back into my hand on that following turn, played Sleep again on the turn after, then proceeded to Mind Sculpt with Jace's Phantasm out, swinging the next couple turns with JP and a Harbor Bandit. A couple turns later, he was down to 2 life on my postcombat, and I Signed in Blood him for the kill.

I didn't get any of the randoms again, but I was fine, since I had 2-1 record and pulled an Ajani in my third booster. I actually made a good number of friends that I hope to see again when I drop by Emerald, so it was a good night overall.

Also, fun fact, my second booster had a foil Battle of Wits. I was so tempted to take it, but I ended up not getting it. Oddly enough, another guy at my table took it, as well as another BoW, and we were joking around about him drafting both of them.
_________________
The 177 Damage Attack Incident of 1942...
NEVER FORGET.